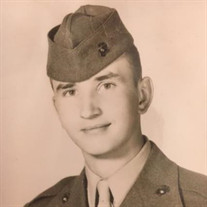 Richard G. Kelly, 80, of Klingerstown, passed away on June 10, 2017, at his residence. He was born in Newark, NJ, on November 2, 1936, a son of the late Mary and George Kelly. He served in the U.S. Marines. Richard was a dog lover and breeder.... View Obituary & Service Information

The family of Richard G. Kelly created this Life Tributes page to make it easy to share your memories.

Send flowers to the Kelly family.