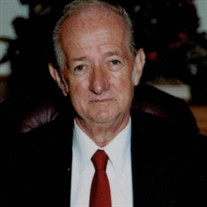 Park W. Leitzel, 82, of Herndon, passed away on February 1, 2021, at the Nottingham Village, Northumberland. He was born in Upper Paxton Twp on June 19, 1938, a son of the late Jennie F. Jury-Leitzel and Charles H. Leitzel Sr.. Park was a 1956 graduate of Upper Dauphin Area High School. After graduation, he worked at Johnson Baillie Shoe Factory, Millersburg. After age 21, he began working for Newman's Insurance Agency in Herndon and later purchased the agency and changed the name to Leitzel's Insurance Agency. In 2008, Park hired William Troutman II as an agent, Mr. Troutman purchased the agency a few years later. Park retired at age 81. Park followed local sports, wrestling, football, and baseball. He followed the Oakland A's baseball team very closely. His other affiliations include the Herndon Masonic Lodge No. 702 (fifty year paid member), Tall Cedars of Lebanon Forest No. 65, Upper Dauphin Shrine Club, Zembo Shriners, Harrisburg, fifty year member of the R.W. Grand Lodge of Free and Accepted Masons of PA, fifty year member of the Loyal Order of Moose, Selinsgrove and the VFW Auxiliary, Hobe Sound, Florida. Park was a member of the Herndon, Berrysburg and the Lower Mahanoy Fire Companies. He was past President of the Susquehanna Valley Association of Life Underwriters and past President of the Lykens Valley Vocational High School Alumni. Park served on the Gratz National Bank Board for 22 years and was the Chairman of the Board for the past several years. He is survived by his companion, Anita M. McDonnell; sons, Roger E. Leitzel, Michael E. Leitzel and five grandchildren. In addition to his parents, he was preceded in death by two sisters, Florence Bowser and Irene Gessner, three brothers, Charles, Jr., Allen and Marvin Leitzel. A visitation with family will be held on Saturday, February 13, 2021, from 10:00am to 11:0am at the James A. Reed Funeral Home, Pillow. Private family memorial services will follow. Interment will take place in the Salem Lutheran Church Cemetery, Killinger. In lieu of flowers, memorial contributions can be made to Herndon Masonic Lodge No. 702, PO Box 264, Herndon, PA 17830.

Park W. Leitzel, 82, of Herndon, passed away on February 1, 2021, at the Nottingham Village, Northumberland. He was born in Upper Paxton Twp on June 19, 1938, a son of the late Jennie F. Jury-Leitzel and Charles H. Leitzel Sr.. Park was a... View Obituary & Service Information

The family of Park W. Leitzel created this Life Tributes page to make it easy to share your memories.

Send flowers to the Leitzel family.