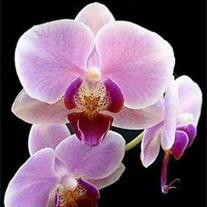 Lena E. (Wirt) Adams, 89 Passed away Saturday morning, February 12, 2011 at the Emmanuel Home, Northumberland, PA. A Former resident of McKees Road, Dalmatia, PA. She was born July 13, 1921 in Jordan Township, a daughter of the late John A. Wirt and Emma Jane (Phillips) Wirt. On June 28, 1942 she married R. Henry Adams, who preceded her in death on January 2, 1987. Lena was a member of Salem Zion Church, Pillow. Lena was a homemaker and enjoyed gardening, sewing and cooking. She loved her family and grandsons. She always made the holiday meals and her filling and chiffon cakes were delicious. Lean was also a 1940 graduate of Lykens Valley Vocational High School, Berrysburg. Surviving are two sons and daughters-in-law, Larry and Barbara Adams of Dalmatia; Dane and Edith Adams of Northumberland; and one daughter and son-in-law, Sharon and David Comes of Dalmatia, two grandchildren; Larry Adams, Jr and Eric Adams. She is also survived by one brother Lynn Wirt of Northumberland. She was preceded in death by two brothers, Delmar Wirt, and J. Owen Wirt, four sisters, Geneva Snyder, Irene Chubb, Marian Feese, and Elva Rothermel, and one son-in-law, Steven Miller. Visitation will be held on Wednesday, February 16, from 7-9 pm at the James A. Reed Funeral Home, Pillow, and on Thursday, February 17, from 10-11 am also at the funeral Home. Funeral services will be at the James A. Reed Funeral Home, Pillow, on Thursday, February 17, at 11 am with Rev Glen Keidel and Rev J. Robert Snyder officiating. Burial will be at Union Cemetery Thursday following the service. Memorial contributions in Lena’s memory can be made to the Dalmatia Area Ambulance, Dalmatia, or Salem Zion Church, Pillow. www.reedfh.com

The family of Mrs. E. Adams created this Life Tributes page to make it easy to share your memories.