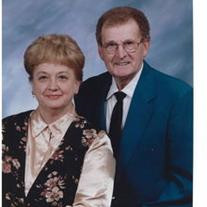 Mr. Raymond "Ramie" Dreibelbis of Cemetery Road, Dalmatia, passed away Sunday, Oct 31, 2010 at the Geisinger Medical Center, Danville, PA. Raymond was born in Lower Mahanoy Twp on April 24, 1925, the son of the late Darwin and Mary (Lenker) Dreibelbis. He was a member of the Zion Stone Valley Church Hickory Corners and worked as a farmer. Raymond is survived by his companion of 27 years, Sandra Shaffer-Mattern of Dalmatia, two daughters Judy and her husband Larry Boyer of Herndon; Ruth and her husband Michael Wiest of Newark, DE; three sons, Dennis and wife Sandra Dreibelbis of Halifax; Marlin Dreibelbis of Pillow; Gene Dreibelbis and wife Suzanne Perry of Lakeland, FL. He is also survived by two sisters, Gladys Dockey of Niskayuna, NY and Elaine Kulp of Halifax, a brother, Stanley Dreibelbis of Millersburg, and by 11 grandchildren and 10 great grandchildren. Raymond was preceded in death by his wife, Grace, a son Terry Dreibelbis and one brother, Ernest Dreibelbis. Friends are invited to call on Thursday, Nov 4 from 9:30-11:00AM at the James A. Reed Funeral Home, Pillow. Services will also be at the Funeral Home on Nov 4 at 11:00AM. Interment will be at Stone Valley Cemetery, Dalmatia. Contributions can be made to the Hickory Corners Fire Co, Dalmatia, PA 17017. James A. Reed Funeral Home is in charge of the services. To sign the on line guest book visit, www.reedfh.com

The family of Mr. "Ramie" Dreibelbis created this Life Tributes page to make it easy to share your memories.