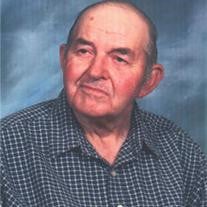 Mr. Belford L. Hoffman, 83, of Turkey Valley Road, Herndon, PA, passed away Friday, May 7th, 2010 at Sunbury Community Hospital, Sunbury, Pa.. He was born Nov 12, 1926 in Rebuck, a son of the late Albert R. and Stella (Rebuck) Hoffman. On December 22, 1945, he married the former Florence L. Zeiders who preceded him in death in 2002. He is survived by a daughter and son in law, Sandra and Kenneth Wiest of Herndon, PA; a son and daughter in law, Kevin and Ann Hoffman of Herndon, PA; three grandchildren, Lt. Col. Todd and Corinne Wiest of San Padro, CA; Shelly and Jeff Rine of Danville, PA; and Kevin Hoffman, Jr, of Herndon, PA; two great grandchildren, Andrew and Clair Wiest. He is also survived by a sister, Mildred Jean Graff of Pillow, PA, and a brother, Gerald Hoffman of Pillow, PA. He was preceded in death by two brothers, Guy and Bobby Hoffman. Friends are invited to call Wednesday 10-11AM. at David United Church of Christ, Hebe, PA. Religious Service at David United Church of Christ, Hebe, PA, at 11AM on Wednesday, May 12th, with Rev Raymond W. Holland officiating. Interment at David's Church Cemetery , Hebe, PA. In lieu of flowers, memorial contributions may be made to David's United Church of Christ Hebe, PA. James A. Reed Funeral Home, Pillow, is in charge of the services. To sign the on line guest book visit, www.reedfh.com

The family of Mr. L. Hoffman created this Life Tributes page to make it easy to share your memories.