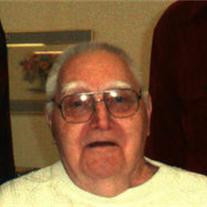 Mr. Charles Francis Engle, 94, of Dalmatia, PA.died Thursday, November 12th, 2009 peacefully at Nottingham Village, Northumberland, PA. Charles was born in Lower Mahanoy Twp., Pa. on April 21, 1915, the son of the late Irvin F. and Mary A (Zeiders) Engle. He was the husband of Anna M (Stoner) Engle. He was a member of Church of Jesus Christ of Latter Day Saints, Millersburg, PA. He was a Farmer and Shoe Factory Employee at Crissinger Farms, Rebuck and Muskin Shoe, Millersburg Retired. A Member of the Hickory Corners Fire Company. Charles is survived by two sons, Paul Engle of Dalmatia, PA, and Dale Engle of Liverpool, PA; one daughter, Helen Wertz of Dalmatia, PA; two brothers, Allen Engle of Elizebethville, PA and Edwin Engle of Philadelphia, PA; and by one sister, Margaret Seigfrrid of Shippensburg, PA He is also survived by 8 Grandchildren and 10 Great grandchildren. He was preceded in death by his first wife Mabel E. (Wertz) Engle in 1981; by two brothers Clarence & Albert Engle; and by 4 sisters Leah Salisburg, Ruth Engle, Jennie Miller, & June Engle; & also by one grandson, Greg Engle. Viewing will be on Monday 10 to 11 AM. at James A. Reed Funeral Home. Religious Service at James A. Reed Funeral Home at 11:00 AM on Monday, November 16th, with William Willbert officiating. Burial will be at the Wayside Mission Cemetery, Hunter Station, PA also on Monday. Donations can be made to the Church of Jesus Christ of Later Day Saints Klinger Road Millersburg, PA 17061. www.reedfh.com

The family of Mr. Francis Engle created this Life Tributes page to make it easy to share your memories.