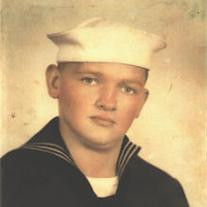 Jay C. Trautman, 77, Lykens Twp, passed away Thursday, July 12th, while in the company of family members, at Harrisburg Hospital, Harrisburg. Jay was born in Tower City, PA on January 19, 1935, a son of the late Helen (Reiser) and Charles Trautman. He was a member of Simeon United Lutheran Church Gratz. He served in the U.S. Navy in the Korean War. He was employed at AMP Tower City. Jay is survived by his wife Romaine, two daughters, Deborah Trautman, of Lykens Twp; Carol, wife of Rick Lahr, of Herndon; two sons Terry Trautman and companion Tammy Tritt, of Lykens; Jim Trautman, husband of Lisa of Herndon. Jay is also survived by seven grandchildren and several nieces and nephews. Jay was preceded in death by one brother, Lyle Trautman, and by one sister, Dawn Shutt. Visitation will be on Monday July 16th, from 10-11 am at Simeon United Lutheran Church, Gratz. Memorial Service will follow at Simeon United Lutheran Church, Gratz, at 11am on Monday, July 16th, with Rev. Kathleen Kuehl officiating. In lieu of flowers, memorial contributions may be made to Simeon United Lutheran Church Gratz, PA 17030 or Veterans of Foreign Wars, Post 2385, Lykens, PA 17048. James A. Reed Funeral Home, Pillow is in charge of the arrangements. www.reedfh.com Send Flowers & Gifts

The family of Jay Trautman created this Life Tributes page to make it easy to share your memories.

Send flowers to the Trautman family.