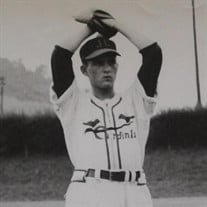 Jack A. Hepler, 89, of Gratz, passed away peacefully on July 3, 2020, at the Jewish Home of Greater Harrisburg. He was born in Gratz on February 3, 1931, the son of the late Laura and Harry Hepler, Sr. Jack served in the US Navy from 1952-1960 and was retired from the PA Game Commission. From 1950-51, he played professional baseball for the St. Louis Cardinals organization in Johnson City, TN, and later, during his service, for the US Navy baseball team. He was inducted into the PA Sports Hall of Fame in 2013 and was a life member of the Gratz Fire Company. Jack loved hunting and fishing, especially hunting bear with family and friends at his cabin in Potter County. Jack is survived by his wife of 68 years, Irene (Sitlinger) Hepler; a daughter, Deborah (Raymond) Glosek; three sons, Stan (Gail) Hepler, Robert (Crystal) Hepler, and William (Leslie) Hepler; as well as six grandchildren and three great-grandchildren. As per Jack's wishes, there will be no services. Donations in Jack's memory can be made to the Gratz Fire Company, PO Box 8, Gratz, PA 17030 or the Gratz Little League, c/o Kylie Bender, 625 West Market Street, Gratz, PA 17030.

The family of Jack A. Hepler created this Life Tributes page to make it easy to share your memories.

Send flowers to the Hepler family.