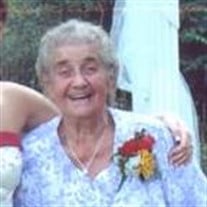 Grace H. Stence, 85, of Millersburg, passed away on March 1, 2016, at the Manor at Susquehanna Village, Millersburg. She was born in Millersburg on July 20, 1930, a daughter of the late Helen and Lester J Paul. Grace was employed at Johnson... View Obituary & Service Information

The family of Grace H. Stence created this Life Tributes page to make it easy to share your memories.

Send flowers to the Stence family.