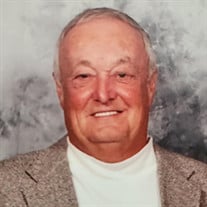 Eugene H. Witmer, 81, went to be with his heavenly father on Saturday, November 25th at his home in Dalmatia surrounded by loved ones. He was born September 17th, 1940 in Sunbury, a son of the late Margaret A. Tressler Witmer. On August 27th, 1961 he married his best friend and the love of his life, Carol Jean Wynn of Hickory Corners. Gene graduated Mahanoy Joint High School in 1958 where he played football and basketball. He also played trombone in the band. He then went on to achieve a Bachelor of Science Degree in Accounting. Graduating in 1962 from Susquehanna University he also played intermural basketball and football and was a member of the Lamda Chi Alpha Fraternity. Upon graduation from college, Gene returned home to the family farm to join his grandfather, the late Mark N. Witmer at Green Acres, Inc. Gene was one of founders of Farmers Best, Inc. of Lewisburg in 1962. He later founded Green Acres Fencing with his son Mark W. Witmer. He was director, secretary and agent for Stone Valley Mutual Fire Insurance Company. Gene was a life long member of Zion Stone Valley Church, Hickory Corners having been baptized, confirmed and married there. There he was past president of The UCC Consistory and also past president of the cemetery association. He also presently had been serving as Elder of the UCC Consistory at the time of his death. Organizations that Gene enjoyed being a member of throughout his life were The Herndon Masonic Lodge #702, Millersburg Tall Cedars Forest #125, Williamsport Consistory, Hickory Corners Fire Company, NRA, Dalmatia Boat Club, and Silver Stragglers Golfers. He also was one of the original founders of the Fiddler’s Run Sportsman Association. Gene had a “camp” with his son Curt Witmer in Potter County where together they enjoyed countless hunting and fishing trips along with his grandsons, son-in-law and friends. The entire family also enjoyed many annual trips to the Galeton Fireworks for The 4th of July. Gene also had a closer to home retreat later in life with Lauren & Shawn which became known as “Man-Town” where the busy times in life were slowed down over many a campfire along the local Mahantango Creek. As the creek flowed by in the background laughter could be heard as memories were created there together with Carol, and his many precious family members and friends. Gene absolutely loved the outdoors. In addition to being an avid fisherman and hunter he spent many enjoyable hours on the golf course with his son Mark and lots of other golfing buddies. Cherished memories were also made out on the Susquehanna River in his boat too over the generations with his family, friends and dog Kenzie. Together he and Carol were the number 1 Fans at all their childrens, grandchildrens and great grandchildren’s school and sporting events. Surviving in addition to his wife Carol Jean are two sons and one daughter: Curtis Eugene Witmer (& wife Leslie) of Nuangola, Mark Wynn Witmer (& wife Kelly) of Herndon and Lauren Nicole Hackenburg (& husband Shawn) of Dalmatia *Surviving also are 6 grandchildren: Amanda Lauren Witmer, Leon Eugene Witmer, Sierra Diane Witmer, Claire Alana Witmer, Chance Jacob Hackenburg, Jace Devon Hackenburg and 5 great-grandchildren: Landon Scott Fisher, Logan Christopher Fisher, Allie Jade Witmer, Cruz Jeson Witmer, Mateo Mark Gray. Genes family also included Sister in law and Brother in law Leona & Robert Shaffer, Sister in law and Brother in law Virginia & Melvin Smeltz (Deceased), Nieces and Nephews Karen Long (Deceased), Debra Leitzel, Melanie Peters, Rodney Smeltz, Troy Wynn and Chad Wynn. Great Nieces and Nephews Natasha, Travis, Kira, Todd, Joshua, Storie, Chelsea. Gene will be forever adored in the hearts of his family whom he dedicated his life to showing that he loved with all of his heart and soul. Services will be held at Zion Stone Valley Church, Hickory Corners on Thursday December 2nd at noon with viewing being held between 10:00 - 12:00.

Eugene H. Witmer, 81, went to be with his heavenly father on Saturday, November 25th at his home in Dalmatia surrounded by loved ones. He was born September 17th, 1940 in Sunbury, a son of the late Margaret A. Tressler Witmer. On August 27th,... View Obituary & Service Information

The family of Eugene H. Witmer created this Life Tributes page to make it easy to share your memories.

Send flowers to the Witmer family.