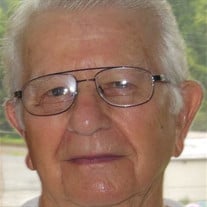 Clarence Junior White, 90, of Dalmatia passed away peacefully on Saturday May 10, 2014. He was born in Dalmatia on August 3, 1923, the son of the late Bernice (Radal) and Edward Lewis White. Clarence, Private First Class, served in Company C 634th Tank Destroyer Battalion in World War II. He received the Good Conduct Medal, American Thr Service Medal, EAME Thr Service Medal, W/5 Bronze Stars and WW II Victory Medal. Clarence married the love of his life, the late Germaine Seachrist White on February 22, 1947. Her death ended a marriage of 65 years. Clarence enjoyed working in his garden and telling the Phillies how to play baseball. Junior, as many of his friends called him, was proud of his participation on 1940 Lower Mahanoy Twp. High School State Championship Soccer team. He worked tirelessly at Bethlehem Steel for many years to provide for his family and give college educations to his children and grandchildren. He retired in 1985. Junior was a member of the Trinity United Church of Christ, Post 504 of the American Legion, Loyal Order of Moose, VFW, Lower Mahanoy and Herndon Fire Companies, and the Northumberland Senior Center, Herndon. He is survived by a son, Rick and wife Judy White of Dalmatia; a daughter Connie and husband Craig Williams of Birmingham, Alabama; five grandchildren, Aaron White and wife Nina, Bryan White, Maribeth White, Travis Williams and wife Emily, Kelsie Williams; one great-grandson, Liam Gregory White; and one brother, Kenneth White. He was preceded in death by one brother Albert Kerstetter and two sisters, Goldie Rieger and Beulah Ditty. A memorial service will be held Saturday, June 14, 2014 at 2 p.m. at the Trinity United Church of Christ, Dalmatia, with the Rev. Jonathon Albright officiating. The family will see guests prior to the service from 12 noon to 2 p.m. In lieu of flowers, memorial contributions can be made to Trinity United Church of Christ, PO Box 10, Dalmatia, PA 17017.

Clarence Junior White, 90, of Dalmatia passed away peacefully on Saturday May 10, 2014. He was born in Dalmatia on August 3, 1923, the son of the late Bernice (Radal) and Edward Lewis White. Clarence, Private First Class, served in Company... View Obituary & Service Information

The family of Clarence Junior White created this Life Tributes page to make it easy to share your memories.

Send flowers to the White family.