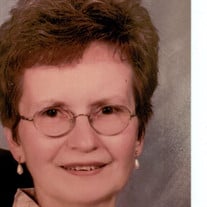 Bonita L. Mattern, 74, of Mifflin Twp, passed away on December 1, 2020, at the Holy Spirit Hospital, Camp Hill. She was born in Lykens Twp on September 2, 1946, a daughter of the late Gertrude and Arland Scheib. Bonita was a homemaker, worked... View Obituary & Service Information

The family of Bonita L. Mattern created this Life Tributes page to make it easy to share your memories.

Bonita L. Mattern, 74, of Mifflin Twp, passed away on December...

Send flowers to the Mattern family.