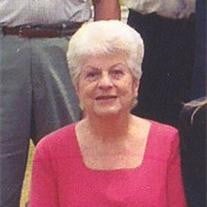 Mrs. Betty Headdings, 80 of Camp Hill, passed away Sunday Aug 30, 2009 peacefully at Hospice of Central Pennsylvania, Harrisburg, PA. Betty was born in Gratz, PA on Feb 20, 1929, the daughter of the late Marlin and Iva (Traoutman) Reed. She was the wife of Woodrow Headdings. She was a member of the Good Sheppard EC Church, Gratz and the Westshore Baptist Church, Camp Hill. A member of the ABWA Penns Woods Chapter; she also did volunteer work at the Holy Spirit Hospital and at Hershey Park. She was employed as an Office Manager at Alcam, Harrisburg, PA. Betty is survived by her husband Woodrow, by one son, Rick Headdings and wife Karen of Camp Hill; by on grandson Richard Headdings and wife Nicole of San Francisco, CA, and by on grand daughter, Stephanie Headdings of Camp Hill. She is also survived by three brothers James Reed of Gratz, Marlin Reed of Myerstown, and Joseph Reed of Pillow. She was preceded in death by one sister, Polly Bonawitz and by on brother, William H. B. Reed. Visitation will be on Thurs from 7-9PM and on Fri 10-11AM at the James A. Reed Funeral Home, Pillow,PA. Services will be on Fri Sept 4th at 11AM also at the funeral home. Burial will be at the Gratz Union Cemetery, Gratz PA Donations can be made to Hospice of Central Pennsylvania, 1701 Linglestown Rd, Harrisburg, PA 17110. www.reedfh.com

The family of Mrs. Headdings created this Life Tributes page to make it easy to share your memories.

Send flowers to the Headdings family.